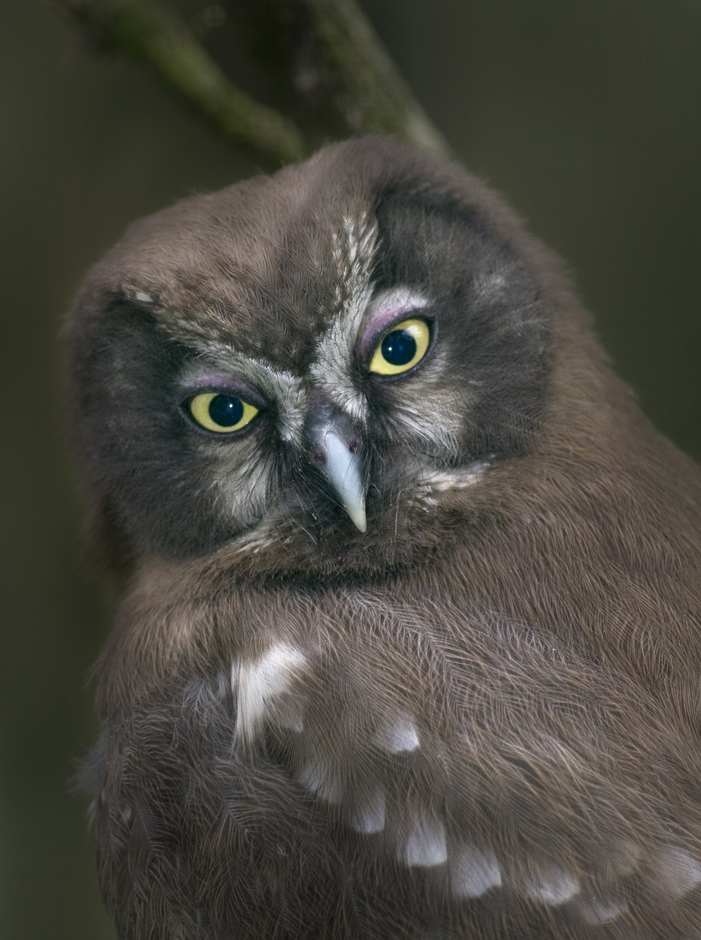 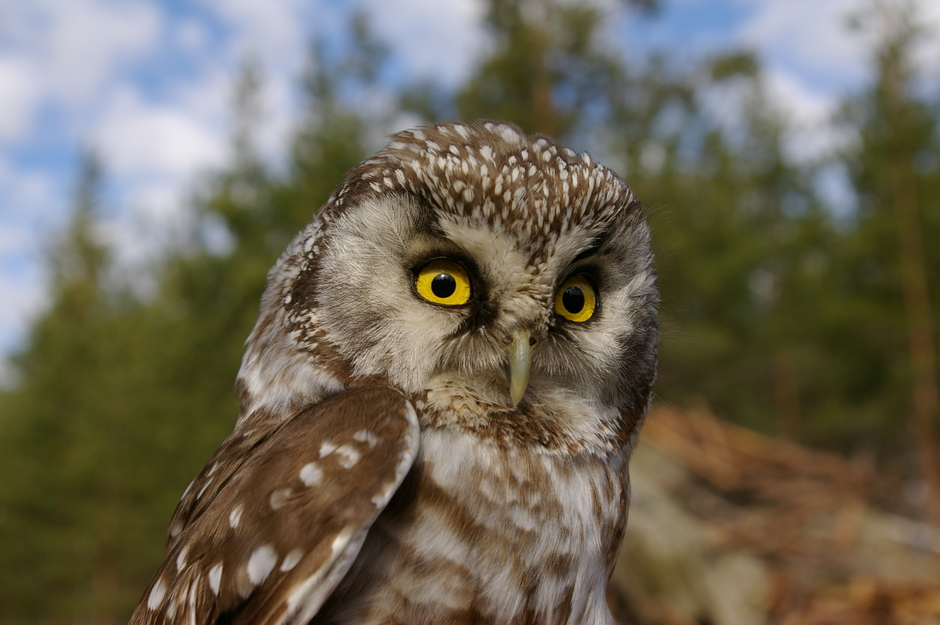 Tengmalm’s owl (Boreal owl) (Aegolius funereus) is a part of the Strigidae family (true owls), together with other species of owls – eagle-owl, Eurasian pygmy owl, little owl, tawny owl, Ural owl, long-eared owl, short-eared owl, and scop owl – which regularly or rarely nest in the Czech Republic. Boreal owl is listed as a protected species. It is a smaller owl with a rather large head, pale facial disc with dark border, bright yellow eyes and feathered legs. It is dark-brown above with white flecking, whitish underparts streaked with brown. It is a typical nocturnal owl, whose activity begins and ends depending on sunrise and sunset. It inhabits forests throughout the Czech Republic. It also nests in areas damaged by air pollution, where it willingly uses bird boxes for nesting. The boreal owl reproduction period is significantly influenced by the availability of food, which consists mainly of small land mammals. In periods of food abundance females lay large clutches (up to eight or nine eggs) and can nest 2-3 times during the season. The diet is composed exclusively of yellow-necked mouse and vole (no birds). Most offspring are successfully reared, males are polygynous (i.e. they nest with two or more females at the same time) and females leave their offspring prematurely to nest again with another partner. Conversely, during low availability of small mammals, younger individuals often do not nest at all. Older individuals nest once a season, broods are small, parents usually raise only two to four chicks; birds are often a part of their diet.

For more than 15 years the Faculty of Environmental Sciences of the Czech University of Life Sciences Prague has been researching boreal owl in areas damaged by air pollution in the Ore Mountains. Since 1999, a team of biologists have been offering suitable bird boxes for nesting of the owl, which inhabits around 10 boxes every year. In 2001, technology was used for the first time to monitor the nesting of this rare owl. The applied devices have been gradually improved in cooperation with the Czech Technical University in Prague. In 2004 and 2006 there was a total of 12 monitored owl’s nesting. The devices used were able to operate continuously 24 hours a day and photographically record each owl activity at the entrance hole of the box. In 2005, these monitoring devices were moved to the largest foreign study area of the boreal owl in Finland. Nine nestings were successfully monitored there in one season. Following a longer break, in 2012 the monitoring of owls was resumed. The cooperation of the Faculty of Environmental Sciences of the Czech University of Life Sciences Prague with the Czech Institute of Informatics, Robotics and Cybernetics of the Czech Technical University in Prague and the company ELNICO Ltd. resulted in the development of a unique smart bird box. The smart bird box is designed as a modular built-in electronic system, built in a standard wooden bird box. The main part of the system is a control board (built-in computer with a dual-core processor Freescale Vybrid), to which two cameras are connected (one directed against the entrance hole, the other aimed at the nest at the bottom of the box), a microphone, optical sensor, two temperature and lighting sensors and a smart card reader for identification of individual owls (click here for details).